The Freedom To Get A Mohawk At 6 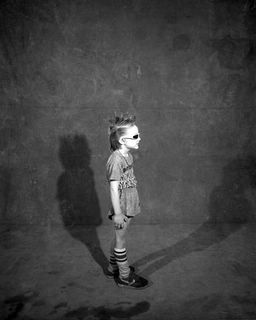 Did you ever really want to do something when you were a child and your parents would always say no?

That didn't happen too often with my parents...

When I was about 10 and my youngest brother was 6, he desperately wanted a mohawk.

Perhaps in , or at the time, this would not have been such a dramatic fashion statement. But for a lily white boy growing up among the cornfields of this certainly was not the normal request. (Nowadays it probably wouldn't seem unique at all.)

I'm not sure why my brother wanted a mohawk in the first place because neither I, nor our other brother Patrick-Spirit (PS) ever had our hair done that way...and certainly no others from the community did either. It was likely the combo effect of influences floating around our house and the popular culture of the time. My mom would often post colorful images on the fridge such as the one I remember of punks with spiked purple hair, dog collars around their necks, walking down the street hand in hand. Or it could have been Mr. T and the A-Team show my brothers and I loved so much.

The hairdo didn't last more than a few months, and our parents seemed to get a kick out of it. Our grandparents didn't approve and even tried to take my brother to go get another hair cut once. And a lame portrait photographer tried to comb it down for 's annual school photo. But other than that it was just another hippie kid memory of childhood freedom...

(Photo courtesy of Peter Feldstein who photographed my brother at the time as part of his project: Everyone in Oxford, Iowa 1984.)

Copyright Unity
Posted by Unknown at Saturday, July 16, 2005 No comments: